Tragedies can hit at all times and places. Jewish law of dignity and respect for the deceased mandates that every victim be buried right away.

When a family loses a beloved member suddenly, they are thrown into a storm of shock and grieving. Grief is compounded when family members are far away and can’t get back on time. Unprepared and vulnerable, the last thing they should be worrying about is getting to the funeral on time.

CSE arranged a private jet to New York, so that the two neshamos could finally find peace with burial. 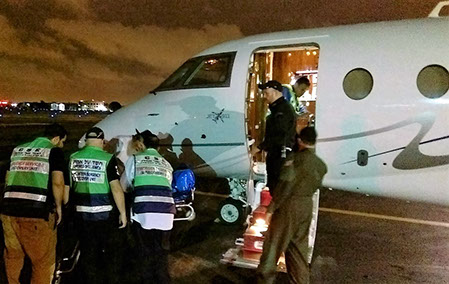 One beautiful day in Miami, five prominent visitors from New York went together to the scenic beach. The sun was shining above them, and the warm sand stretched out like a cushion. No one could predict that two minutes later, a powerful rip tide would carry them away into the harsh waves. And that only three of them would return alive.

The two men who had so suddenly and tragically passed away were loving fathers and grandfathers, and distinguished members of their community in New York. The tragedy stunned the bereft Jewish community.

CSE worked with the families and community members to ensure their loved ones would be treated with utmost respect and dignity. It was imperative to get the deceased to New York as soon as the hospital released them, so they could be laid to rest. CSE arranged a private jet to New York, so the two neshamos could finally find peace with burial.

This is one story. There are so many others. Chesed shel Emes has coordinated numerous private jets, for so many victims through the years, so that precious souls in Klal Yisroel can be buried on time and with dignity.

Chesed shel Emes also arranges airborne transport for Jewish victims who are unidentified or have no next of kin, to the CSE cemetery in New York. These deceased members of the Jewish nation would otherwise be doomed to a terrible fate, lacking the halachic burial needed for them to find peace. No expense is spared to ensure that every Jewish niftar is given the dignity and respect the Torah requires we give them.

Losing a family member suddenly is one of the hardest things a person can go through. CSE makes sure the deceased get the dignity they deserve when they depart this world. And helps their family members get the closure they need to start healing.

Helping families in time of

Chesed Shel Emes is a recognized and certified 501(c)(3)